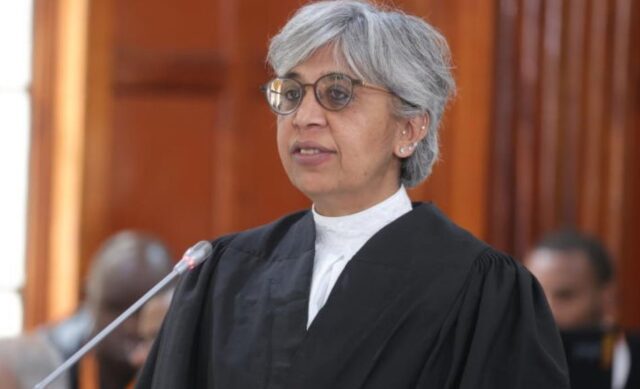 Zehrabanu Janmohamed is a Kenyan lawyer. She is among the legal team representing John Njoroge, a petitioner challenging William Ruto’s win in the 2022 presidential election.

The lawyer was born to Mohamed Taki Janmohamed and Khurshid Tejani Janmohamed. Details on her date and place of birth have not yet been disclosed. There is also not much to share on her primary and secondary school education.

Zehrabani completed her ‘A’ levels education in Nairobi Kenya before moving to the U.K for her LLB degree at the University College London (UCL) where she graduated in 1986. In 1997, she went to become a barrister at law, Lincoln Inn.

In 1988, Zehrabani returned to Kenya where she joined Archer & Wilcock (a law firm) as a student. She rose ranks to become a partner in 1993, and later became a senior partner in 2002

Zehrabani currently practices law at the High Court, Court of Appeal, and the Supreme court of Kenya. On Wednesday, August 31, she argued at the Supreme court, saying that the Independent Electoral and Boundaries Commission (IEBC) chairman Wafula Chebukati should be barred from conducting any more elections.

In 2012, Zehrabani made history after she was appointed as the chair of cricket Kenya. She was the first woman to be the head of a national cricket body. She went ahead and beat her own self to become the first woman to head a continental cricket association when she was elected chairperson of the Africa Cricket Association.

There are no details on Zehrabani Janmohamed’s net worth. She is however a successful lawyer, who earns most of her wealth through her career in the legal field.