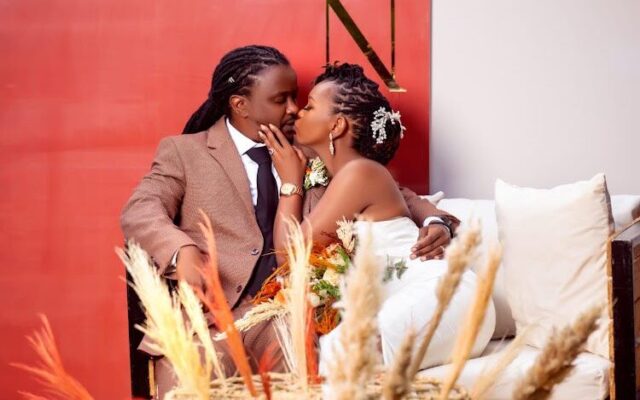 Zia Jepkemei Bett alias Zipporah Bett is now officially Nyashinki’s wife after the two tied the knot in a highly private ceremony in Nairobi attended by the kingpins in Music, family, and friends. The two had a traditional wedding in November 2019. This article looks into her biography highlighting her background, career, education, and personal life details.

Zia was born in Nandi County in the 1980s and is currently in her thirties. She reveals very little about her family life including her parents and siblings. As such, this information will be made available later on.

Zia attended Braeside High School where she was an active Basketball player playing on the school team. She was such a good player at the pitch and this earned her a position at Rusinga High School to take her A-Levels. Her love for the sport did not flinch and she went on to make news as her team won several leagues and tournaments.

After Rusinga High School, Zia joined Daystar University for her higher education where she pursued a Bachelor of Arts in Community Development.

Mrs. Ongegu has had a varied career experience since she left the university to include social organizations, volunteering, and establishing her own businesses. She worked at a social organization called Love INC and later on volunteered with Endless Frontier.

Later on, Zia explored her love for fashion design and skills to set up an online fashion boutique shipping around the world. This marked the birthing of Zia Collection Africa, a platform that has had successful milestones over the years. The boutique has had personalities such as Brenda Wairimu promote the brand. With its growing success, the boutique has had mainstream media exposure with Citizen TV and Nation Media. This has led to business growth with the page having more than 30,000 followers.

Additionally, Zia Bett set up Keto Life, a business that helps people achieve their health goals such as weight loss using the Ketogenic diet, incorporating healthy eating habits, and exercising. She uses this platform having used the diet herself after childbirth to lose 12kg.

She has a sister named Janet Bett – Karoney whom she had made a medical appeal for after she was diagnosed with a rare blood disorder. The disorder would have Janet spend almost half a year in India receiving treatment.

The entrepreneur is now officially married to her long-time partner Nyashinki. The two wedded on Friday 10th December 2021 in an invites-only ceremony with the photos taking many girls to their beds crying. Mr. and Mrs. Ongegu had had a traditional wedding in November 2019 and now crowned it with a white wedding. The wedding was attended by personalities such as Big Pin, Wahu, Nameless, and Collo among more. Nyashinski’s previous manager Liwali Fakii was his best man in the pompous event. Also in attendance was the couple’s son who was born in March 2020.