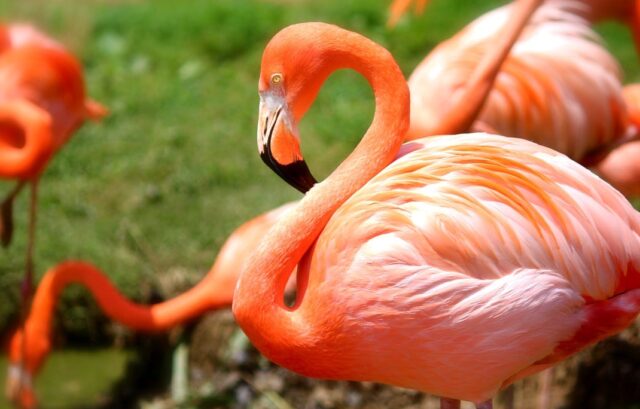 Kenya, a country in Africa is known for the beautiful pink-colored flamingo bird. This article will look into the interesting facts about flamingos in Kenya. The flamingo has quite some unique details about it that have tourists from across the globe wanting to catch a glimpse of these birds. To begin with, the eggs are laid in Tanzania’s Lake Natron but hatch and mature in Kenya.

These pink birds feed on crustaceans and small fish which give it its pink color due to betacarotene present in crustaceans. The flamingos are also able to filter feed in water for several hours a day.

Fun fact: the flamingos can feed upside down while dancing and also hold their breath while feeding.

Flamingos are known to live in flocks between 10 and over 10,000 individuals.

The birds begin mating from the age of 3 years although most of them begin at 5 years. The high-status flamingo influences the flock to breed by changing its feathers to a deeper shade of pink.

The flock mate around the same time for the chicks to hatch the same time. The baby birds are born in grey color and are fed milk for the formative three months by both parents as well as other flock members.

Did you also know that Flamingos: