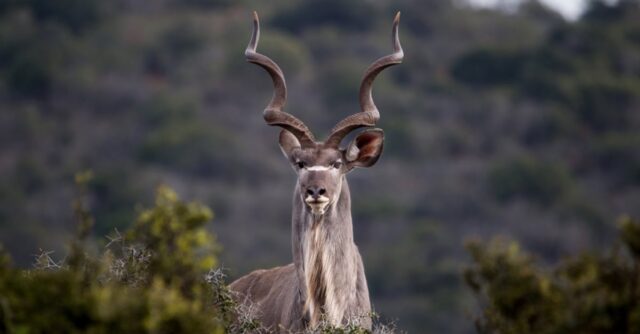 The smaller kudu antelopes are the smaller model of the greater kudu as their name suggests. Their scientific name is Tragelaphus Imberbis. They belong to the Kingdom Animalia and the Phylum Chordata.

These species have huge rounded ears that distinguish them from the greater kudu antelopes. The male lesser kudu have an average weight of 108 kilograms while the females have an average weight of 70 kilograms. In this species, only the males have horns; they are spiral and measure between 50 and 70 centimeters. Also, the males have a prominent black crest of hair on the neck. Female lesser kudu antelopes have four teats.

These types of antelopes are browsers; they feed on a mixture of leaves, young shoots, pods of Acacia, and twigs, just to mention but a few. They are hardy animals since they can survive for a long period without water.

Lesser kudu antelopes occupy mostly dry and bushy areas. They are mainly found in Tsavo and Marsabit national parks. Such environment favors them since they are very shy animals. They mostly hide in the bushes during the day which keeps them protected from predators. They leave only early in the morning, before the break of dawn and very late after dusk.

The female antelopes don’t have a specific breeding period; they give birth at any time.

Read: How to vote on Big Brother Naija 2021, Shine Ya Eye

The average population of the kudu antelopes is about 118,000. They mostly live in groups although the males prefer solitude compared to the females.

In both species, it’s only the males that have horns. Both species are very alert to danger.