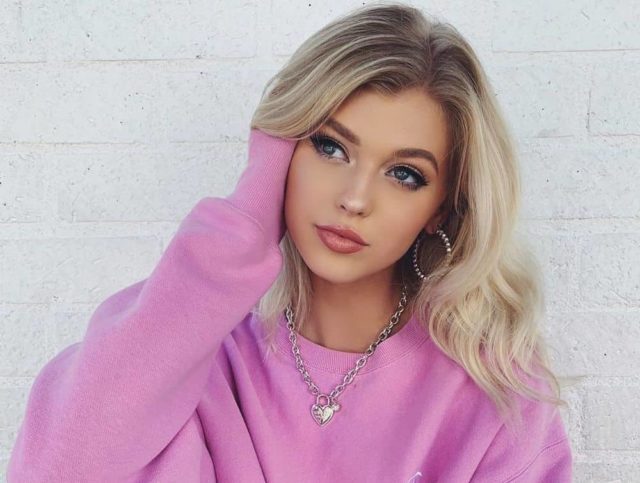 Loren Gray Beech is an American social-media personality. She utilizes social media platforms such as Tik-tok to induce sunshine in the lives of her followers. Long ago a five-feet blonde haired, Blue eyed teenage girl took social media by storm. Famous for her lip sync Videos on the social media app Tik-tok, she managed to garner 17 million followers.

She has then gone on to dominate other social media platforms, commanding a sizable following that has her turning down some endorsements. But who is she? Where does she come from, what are her likes, dislikes? Where did she study?

Loren Gray Beech is 18 years old as of the year 2020. She was born on the 19th of April 2002 in the town of Pottstown, Pennsylvania. She is currently 18 years of age, but do not mistake her youth for lack of accomplishment. She is American both by birth and from Heritage.

Loren Gray belongs to a small, but maybe growing population of children that have been home-schooled. There are records of her attending a local kindergarten as a toddler. However, her mother has home-schooled her ever since.

Loren’s career as short as it has been so far is exemplary. She is multi-talented and knows how to use social media following for commercial gain.

In 2016, she took Tik-tok by storm for her lip sync Videos of popular music. She then built a fan base that also translated to massive following on YouTube and other social media platforms such as Instagram. In time she become a highly sort after brand ambassador just for her social media following.

But her talent doesn’t stop at making cute viral videos. The youngster has a great voice an eye for fashion and a posse, composure for She has been at the forefront of the new age in modelling, known as the social media modelling.

Social media modelling was made famous by Kim Kardashian. It involves corporates choosing or embracing models with huge social media following, as it simultaneously works as brand promotion.

As for her music, it has gotten her recognition, praise and she hope in the not too distant future; accolades.

Loren Gray’s rise to fame has been nothing short of wonderful. The story of Maybe, an obscure teenage girl, rising to social media fame and taking advantage of it; marvelous. And the world has noticed her. Her fans have noticed her. She has three Teen Choice Awards nominations. She was nominated for choice Muser in 2016 & 2018, while she received another for her music in 2019

She was also nominated Muser of the Year 2017 by the Shorty Awards and the iHeart Radio Awards.

Loren unfortunately has grown up with a single mother. Although her parents are still married, they have been separated for quite some time now. Her mother Lora Beech is a mid-income business woman in Pottstown. Not Much is known of her father who is only identified as Mr. Beech. Loren is also believed to have a step sister from her father’s side

Her Love Life hasn’t been pleasant. Maybe it’s because of fame or maybe it’s her free spirit. However, it is officially known that she first dated Juwany Roman and her boo used to be part of her earlier it didn’t end well and she found Joey Kisluk, with whom she was photographed with at a red-carpet event.

That also did not end well. She is currently in a relationship with Mr Ian Jeffrey. It is also important to note that Ms. Loren Gray has never been married to any of the men she has dated. She has decided it that way, to at least work on her career before getting committed.

It is known that Ms. Loren Gray currently lives in Los Angeles, California. However, the worth of her house is yet to be established. Different sources also quote a different sum for her net worth, but most agree that it is in a range of 400-500 thousand dollars. Loren has a number of revenue streams including payouts from social media following, modelling gigs, Brand endorsements, and royalty from music.