Lulu Khadija Hassan is a host of the ‘Nipashe Wikendi’ news bulletin on Citizen TV alongside Rashid Abdalla. The two happen to be the luckiest couple that got a chance to work alongside each other at Royal Media Services. In their news bulletin is a special segment known as Mawaidha ya Bi. Mswafari which advises married people on how they are supposed to handle their marriages.

Lulu’s age is not yet in the public domain. Just like her husband Rashid Abdalla, she was born and raised in Mombasa county. Lulu was born in a family of three girls, grew up in Mombasa. She is of Kikuyu and Seychelles descent, her mother Mariam Abu had Kikuyu and Seychellois roots as did her father.

Lulu’s mother died in 2007 the year that she met Rashid, her current husband on interview at Radio Salaam. As a first born in her family, her mother left her with a real estate business which she is taking care of.

Lulu later got a job at Radio Salaam in Mombasa as a radio broadcaster. This made her realize her talent and ability and therefore went back to college to study Mass Communication and Journalism.

In the year 2008, Lulu got a job to be a news presenter at Radio Salaam. Through a KTN cameraman, she was informed that there was a crisis at KTN which was caused by two Swahili anchors going for maternity leave. She decided to attend interviews and by good luck she was selected.

Lulu later decided to try her luck and attended the Royal Media interviews which she used to hear that they used to pay handsomely. She was hired and has been working here till now.

The Swahili news anchor is married to Rashid Abdalla. The two were blessed with three beautiful children. Rashid Abdalla broadcasts at Citizen Tv alongside Lulu Hassan.

One thing that excites Kenyans is seeing Lulu and Rashid together, especially in the RMS’ Citizen Television studios. The two legalized their marriage in a colorful Muslim Wedding ceremony that was for only invited few. Their wedding photos are the most searched on the internet. Here is one of the captivating captions that wee shot during the ceremony: 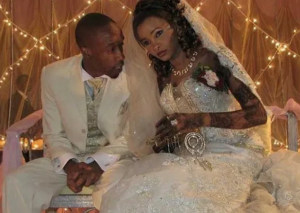 Jointly, Lulu and Rashid have an estimated net worth of over Kshs. 27 Million as of the year 2020. Lulu is a hardworking lady who also happened to be passionate in the film industry. She is the founder and CEO of Jiffy Pictures. The company is specialized in production of Kenyan Drama series. One of the drama series that the company has produced is the popular and most loved Maria Drama Series which airs on Citizen TV.