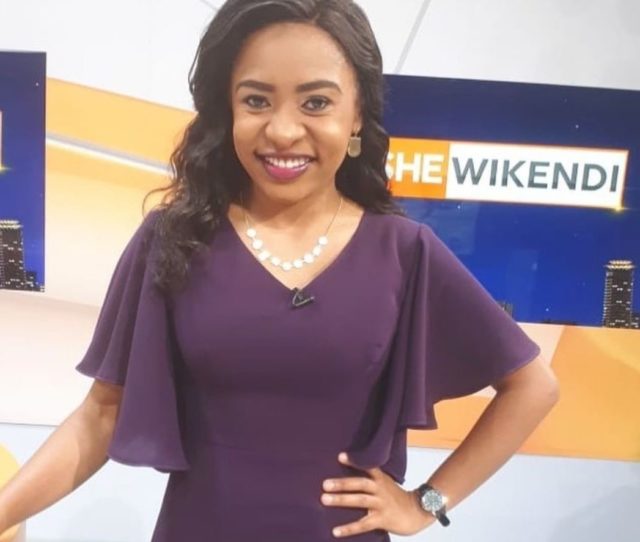 Mashirima Kapombe is an award-winning Kenyan TV anchor. She currently works at Royal Media Services (RMS) on Citizen Television where she broadcasts the Swahili news Citizen TV Wikendi at 7:00pm. She specializes in reporting and anchoring human interest stories.

Mashirima always believes that telling stories on set or in the field is the most fulfilling job for her. On an interview with a local daily, she said that she gets great pleasure and satisfaction when people get help or when others are inspired by her stories or anchoring.

Mashirima is 31 years old as of the year 2021. She was born in Voi Town in Taita Taveta County on 1st of May, 1989. When she was aged 4, her family moved to Nyeri after her father changed jobs. Mashirima’s Dad is a Dentist in Nyeri County. He is a Giriama by tribe. Her mum is a Taita from Voi, in Taita Taveta County.

The news anchor attended Condolata Primary School in Nyeri county where she passed her exams well and joined Bishop Gatimu Ngandu in Karatina. She obtained her degree in Communication and Electronic Media at Daystar University, Athi River Campus.

While at Daystar, she became the Station Manager, News and programme presenter (in both English and Kiswahili) on radio Shine FM – a station that was owned and run by the university. She later joined KBC for her internship between May and June 2011. She later joined Nation Media Group on QFM where she was employed on contract for 6 months.

Towards the end of 2011, Nation media group decided to employ Mashirima and tasked her a role at NTV as a news anchor and reporter. An NMG, she garnered vast experience and later moved to KTN on 4th of February 2013. She worked at KTN for many years before she joined Citizen TV where she hosts news bulletin.

Mashirima’s lucky man is Comedian Kazungu Matano famously known as Captain Otoyo Sibuor. The two brought forth a handsome baby boy whose finer details are still under wraps. In the year 2014, Captain Otoyo posted Mashirima’s photo on social media and captioned it with romantic sentiments which raised eyebrows making fans to join the dots.

His romantic affair with Mashirima was later unwrapped to the public eye in 2014. However, the relationship seems to be a thorn bed since the award-winning news anchor keeps on denying about dating someone and claims that she is single.

Mashirima Kapombe Net Worth and Salary at Citizen TV

As an anchor who has held various senior positions in the media industry, her estimated net worth as of the year 2020 is approximately over Kshs. 25 Million. She gets more of her income from her profession and brand deals. Mashirima pockets something not less than Kshs. 350,000 at Royal Media Services.