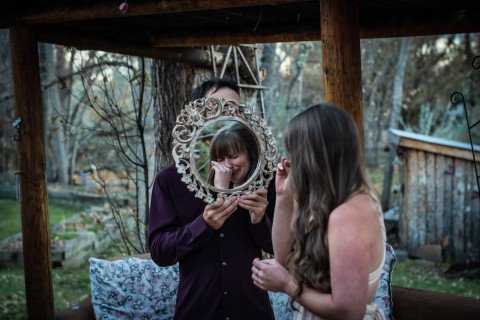 Megan Taylor Morrison made news when she partook in a 1,000-Pound sologamy ceremony celebrating with close friends and family. Sologamy is defined as a marriage by a person to themselves. People who go in this route always speak of the commitment it brings one towards their goal, values, and self-love. This article looks into Megan’s biography highlighting her background, personal life, career, and her sologamy experience.

Megan Morrison is thirty-six years old as of 2021.

Her career journey has been incredibly diversified. Megan spent her first eight years after college doing a job that she did not find fulfilling and instead went on with it since it was the safer option. Her dreams of traveling the world, teaching, and dancing seemed too risky to venture into and she had fears that it would not be a profitable undertaking. She had done several jobs such as being a tour guide, writer, editor, cheesemonger, prep chef, and fundraiser.

She then decided to make things work for her and sought help from mentors and therapies. It was at this juncture that she identified the coaching industry and gathered the courage to set up her own business. She started with Dance Adventures (a dance travel company), something she loved and she could monetize. Meg’s life began taking a positive turn and she was more accountable to herself.

The positivity in her life pushed her to set up her coaching company to help more people get the freedom she had found. She enrolled in an ICF-Certified program giving her the skills she needed to package her services to be useful to her clients.

Her MBTI type is the ENFP which makes her have a blend of introvert and extrovert qualities. This is exceptionally important in her job as she is then able to relate to any client.

Meg married herself in June 2020 after her dream wedding seemed to be going to fail. Her relationship with her husband-to-be came to an end despite her months of preparing for an ideal Halloween-day wedding for herself. She went on with the preparations and on the day, she invited a handful of friends and family to witness her marry herself. She said vows to a mirror and kissed herself to mark the sealing. Megan Morrison clarifies that it had nothing to do with healing hurt or compensation,  but was instead a self-love act.