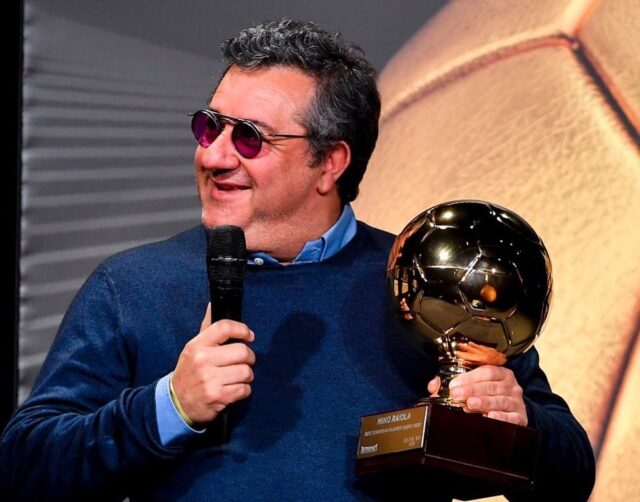 Mino Raiola was an Italian football agent, who was known for representing some of the most high profile footballers, including Manchester United’s Paul Pogba, AC Milan’s Zlatan Ibrahimovic, and Borussia Dortmund’s Erling Haaland.

Carmine Mino Raiola was born in 1967 in Nocera Inferiore, Southern Italy. Later, after a year, his family moved to the city of Haarlem, in the Netherlands, where he grew up. His family owned a chain of pizzerias, where Raiola worked, first by washing dishes, and later, as a waiter. Later, due to his good Dutch-language skills, he took up more responsibility by advising and organizing the business.

In his academic life, Raiola obtained a high school diploma and later attended University for two years, studying law. However, in an interview with the German Sports Magazine in 2016, he revealed that his law studies were a waste of time, saying that, “after all, I can buy lawyers.”

Mino started playing football for the youth Team of HFC Haarlem, but stopped in 1997, at the age of 18, to become the head of the team, and later became the club’s technical director.

His Agency career began when he started working at Sports promotion, a sports agency company. Here, he assisted in the transfers of several Dutch star players to Italian clubs including Ajax player Bryan Roy (in 1992 to Foggia), and Michal Kreek (in 1994 to Padua). In an interview with Sky Sports in 2021, Roy and Kreek both praised Mino, saying that he helped them settle and even in other parts of their life, including opening bank accounts, and buying cars. While staying in Foggia with Roy, Mino met his wife and also the club’s manager Zdenek Zeman, with whom they immediately develop a friendship.

Later Raiola left Sports Promotion to start his own business. In 1995, the Bosman ruling made transfers and player contracts very important in football and therefore increased demand for agents. Mino made his first major independent transfer when Pavel Nedved transferred from Sparta Prague to Lazio.

In 2001, Raiola saw over Nedved’s transfer to Juventus, where he won the Ballon d’Or later in 2003, resulting in a six million lira commission. He later saw through several of Zlatan Ibrahimovic’s transfers that later led him to be the second most expensive footballer in history in 2016.

In 2008, he was involved in two disciplinary hearings for Transfer irregularities.

Over the years, Raiola has built his reputation and has been listed among the most famous and wealthiest agents in football history.

Mino Raiola has an estimated net worth of 84.7 million dollars according to Forbes.

On 28th April 2022, there were rumors of Raiola’s death on social media. However, Raiola tweeted on his official account stating, “Second times in four months they kill me”. On the 30th, his family released a statement, confirming his death at the age of 54.