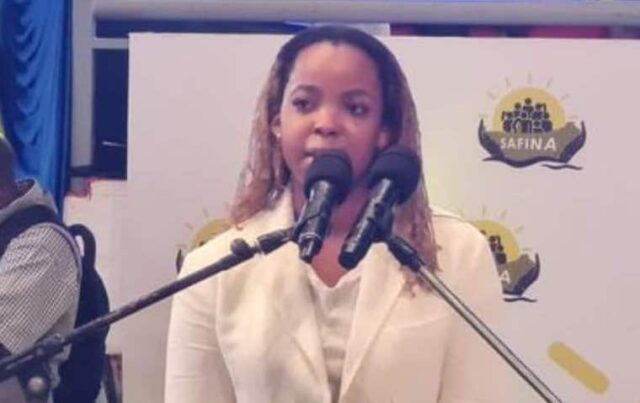 Muthoni Wanjigi is the daughter of the presidential aspirant Jimmy Wanjigi, of the Safina party.  She recently spoke at a National Delegation Conference (NDC), held by the Aspirant party at the Bomas of Kenya.

The politician’s daughter, who was given the opportunity to welcome her father to the podium urged Kenyans to support Jimmy Wanjigi in the upcoming elections.

“One of the greatest lessons my father taught me and my brother is to always believe in our dreams and pursue them with passion. A lesson I see him achieving each day”, says Muthoni.

According to Muthoni, Kenyans will benefit from her father’s wisdom in leadership if elected in the August 9th elections.

“I wish you well dad as you take this mantle and quest to be the fifth president of Kenya. It is my hope that as you are ascending to office you serve the people in true affirmation of God’s will for man and woman. Every person deserves a decent life and to live in dignity”, the politician’s daughter added.

Details about Muthoni Wanjigi’s age, life, and education still remain unknown to the public. However, it is rumored that all of the politician’s children attended the institute Le Rosey in Geneva, Switzerland.

The school is known as the ‘School of Kings’ because of its royal and distinguished alumni. In addition, it is said to be the world’s most expensive private school with an annual tuition and boarding fee of $113,000.

Some of the school’s alumni include King Fuad II of Egypt, Casablancas, Prince Albert II of Belgium, and Jose Ferrer.