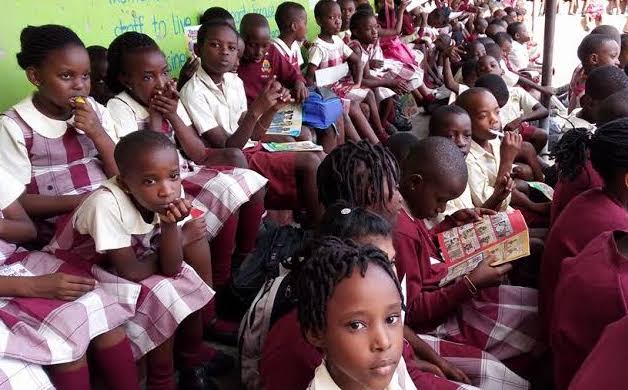 The fast-growing town, Mbarara in Uganda is currently enjoying its infrastructural dominance due to influx of the established private primary schools. The schools are cherished of their excellent academic performance. Amongst them include:

Mbarara Junior School was founded in 1911 by the Church Missionary Society, which was first established at Kamukuzi hill, the then headquarters of Ankole Kingdom is now found at Ruharo hill, also host to Mbarara High School and the gallant St James Cathedral.

The story of Mbarara Junior cannot be told without talking about the beautiful environment in which it is located.  The school enjoys cool soothing winds from River Rwizi, its natural neighbor and this is coupled with the green scenery at the school thanks to the trees that give the school an unmatched serene environment.

The school was supported by Ankole Kingdom’s mission to promote development. When Rev Canon Yoweri Buningwire, one of the visionaries of the school, visited Tooro Kingdom on one of his pastoral visits, he was moved by the way schools were rapidly coming up in the kingdom.

Upon his return, he shared the idea with the then Ankole King Omugabe Kahaya II who presented it to his Parliament and got overwhelming support.

Historically, the school, 1911, the school started in grass thatched hut in Kamukuzi with eight pupils. The school uniform was black tunics (kanzu) with no shoes, and six subjects were taught including discipline, writing, reading, religious knowledge, Mathematics and English. In 1914 when it was re-located to Ruharo, the population had grown to 30 pupils, 23 boys and seven girls.

While at Ruharo, the pupils were separated; girls were taken to where the current Mbarara Junior stands as Mbarara Girls School while the boys remained. In 1952 it became a government-aided school but under supervision of the church.

The school is a private provider of quality all round education that started in 2002. It is located in Mbarara Town near Mary Hill. St. Agnes Centre for Education (SACE) is a mixed day and boarding primary school whose uniform colors are white and blue to represent loyalty and excellence; core values of harmony.

School Vision: SACE seeks a future where younger generations are able to meet, with dignity and respect, personal and societal demands. In addition to academic work, SACE puts emphasis on discipline, grooming and physical skills development.

The mission of the school is: To mould respectable and dignified citizens. The school Motto is “Plan for the future”

St. Agnes Centre for Education is known for the excellent care it provides for the young ones. She provides a perfect child-friendly learning environment. The directors, teachers and support staff have and promote very good staff-child relationships. Children enjoy their stay at SACE and mirror the quality of school they have been through.

The school carries out games and sports activities both in and outdoor, in addition to music, dance and drama. SACE appreciates learning by visualizing and interacting with the environment. Study trips to various learning centers, which expose learners to different learning environments, are organized and a successful annual Math Camp that maintains the notion of mathematics made easier for children. Interviews are done in the months of December and January. Start of term one is during the first week of February.

Katatumba school was founded in 1984, by G. W. Katatumba in memory of this father, the late J. B. Katatumba following his tragic death during the Amin regime in Uganda, in September 1979.

The Academy is located in Mbarara Municipality, 270 kilometers southwest of Uganda’s Capital City of Kampala, less than 4 hours’ drive away on a good tarmac road at an altitude of 1470 meters above sea level, in a rural setting 8km from the center of town on the main Mbarara – Kabale road with admirable scenery and a beautiful natural environment. Here the climate is mild during the day and cool at night throughout most of the year.

The Academy is an independent private day and boarding institution for boys and girls, which is open to children of parents from all walks of life and of all nationalities without distinction of ethnic origin or religious affiliation.

It caters for students between the ages of 5 and 18, from Primary grade 1 to ‘O’ and ‘A’-level, the present average number in each class being 45. Thus, the school is small enough for everyone in it to have some significance in the community, and yet big enough to offer a wide range of opportunity in educational athletic and artistic areas to meet the varied interests of growing children.

The Midigo Calvary Nursery and Primary School was started in the year 2005. Originally, the school was intended for the children of believers, because all the public schools in the area emphasized Islamic studies. Recently, however, the school has been overwhelmed by the number of Muslim parents seeking places for their children to be well educated.

This year, the school admitted 220 children. Over 50 children had to be turned away because have no more room to handle the large numbers. We are currently raising funds to construct more classrooms to accommodate a larger number of students.

About 40% of the school children are now from Muslim families. As they learn academic programs, God has given the school an opportunity to introduce the gospel of Jesus Christ to these children as well as to their parents.

In conclusion, the above outlined schools are the best private primary schools one need to lay a good foundation for the future career. Make your choice today.

A list of Most Marketable Courses Offered at Makerere University 2021