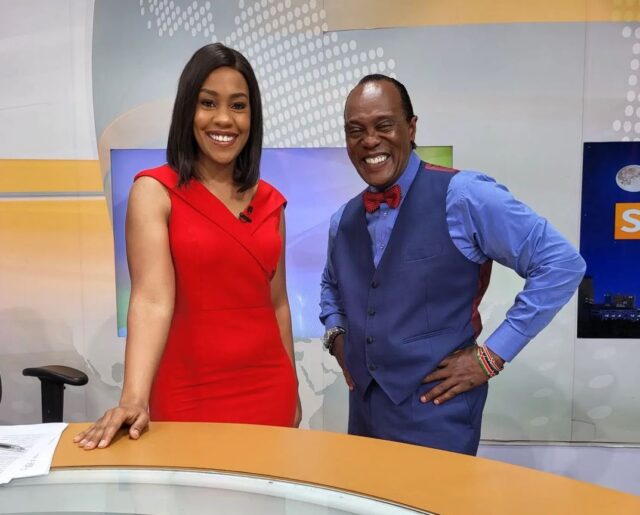 Citizen Television is one of the best TV stations in Kenya. It offers different programs which are watched by thousands of households in Kenya. However, what captivates most of its fans is their unique and entertaining way of delivering the news

The TV station has hired experienced and talented news anchors. Here is a list of all Citizen Television News Anchors;

Jeff Koinange hosts the ‘Sunday Live’ program with Victoria Rubadiri. You can also catch him on Wednesday nights hosting the ‘Jeff Koinange Live Show’. He studied at Hospital Hill for his ‘O’ levels before going to Saint Mary’s for his ‘A’ levels. Later, he went to the Kingsborough Community College in Brooklyn, New York, where he attained an Associates Degree in Applied Science with Honours, Broadcast Technology and management.

He then went to New York University via scholarship, where he studied for a Bachelor of Arts Degree in Broadcast Journalism. Jeff has since worked for PanAm airlines, ABC, NBC, CNN, K24, and Citizen TV.

Lilian Muli hosts the Citizen Weekend News edition every Saturday night. She studied for a Bachelor’s Degree in Communication and News casting at Daystar University. Later, she went to the University of Nairobi where she attained a Masters in Strategic Management.

Before moving to Citizen TV, Lilian Muli worked for KTN, where she had kicked off her career.

Victoria is a presenter at the ‘Sunday Live’ show at 9 pm alongside Jeff Koinange. She studied at Temple University in Philadelphia Pennsylvania, where she attained a degree of Arts in Broadcast journalism.

Anne Kiguta is a host of the ‘Monday Special’ program every Monday on Citizen TV. She studied at the Daystar University where she attained a Diploma in Communications, Electronics, Media, and Public Relations.

Yvonne is one of the most experienced presenters in the industry. She started her career at the age of 8 when she presented a Children’s variety show. She has since worked at QFM as a producer, news anchor, presenter, and producer at the Nation Media Group. She later held different positions working at KTN and was even privileged to be one of the main interviewers during the 2017 presidential debate.

You can catch Yvonne on the ‘Tonight’ program, which is aired every Thursday night at 9 pm.

Hussein hosts the ‘News Night’ program every Tuesday night at 9 pm. He also participates in the ‘News Gang Programme’ after the 9 pm news on Thursday.

There is not much about Hussein’s life except he is married to Malyun.

Waihiga Mwaura is an award-winning TV presenter. Currently, he hosts the ‘Friday Night’ news bulletin alongside Jacque Maribe. He is also one of the hosts of the ‘Day Break’ breakfast show every Monday to Friday from 6. a.m to 9. a.m.

The news presenter studied at the African Nazarene University. He is married to the famous gospel musician Joyce Omondi.

Together with Waihiga Mwaura, Jacque hosts the ‘Friday Night’ News Bulletin. She studied Journalism at the University of Nairobi. She worked for Kiss TV, and later as a senior political analyst at K24 before being employed at Citizen TV.

The talented Fred Indimuli is currently a host at the ‘Day Break’ Breakfast show. He studied for a Diploma in Cinematography and Film/ Video production at the Kenya Institute of Mass Communication. He also studied for a Bachelor of Arts Degree in Language and Communication/ Literature.

Fred worked in different roles at the Radio Africa Group, before working for Kiss TV, and later Radio Africa Limited.

Lulu Hassan is one of Kenya’s sweethearts. She hosted the ‘Nipashe Wikendi’ program alongside Kanze Dena, before Kanze was hired by the State House. Lulu was then paired with her husband Rashid Abdalla to host the program every Saturday and Sunday at 7 pm.

Mashirima Kapombe is an award-winning presenter who hosts the ‘Nipashe’ news bulletin every Friday night at 7 pm. She studied for a bachelor’s degree in Communication and Electronic media at Daystar University.

She started her career at the University’s Radio station, and later worked as an intern at KBC, and then QFM. NTV later hired her, before she moved to KTN and now Citizen TV.

Nimrod Taabu hosts the Thursday Night news at 7 pm, which is usually presented in Swahili. Before joining Citizen TV, Nimrod worked for The Standard Newspaper, KTN, and later, NTV.

Rashid Abdalla is one of the most celebrated presenters in Kenya. He is married to Lulu Hassan, and together, they host the ‘Nipashe Wikendi’ every Saturday and Sunday. Before joining Citizen TV, Rashid worked for QTV and NTV.

Jamilla Mohammed studied at the University of Nairobi where she attained an arts degree in Journalism and Media studies, and later a Masters degree in International Conflict Management.

Before getting employed by Citizen TV, Jamila worked for NTV, as the Manager for Programming and Content Development.

With a Bachelor of arts degree from the University of Nairobi, Mwanahamisi is one of Kenyans’ favorite on Citizen TV. She hosts the Tuesday News Bulletin at 7 pm. Her fluent Swahili is one of the best things about her presentation.

The presenter was once suspended from Citizen TV alongside Yusuf Ali, Swaleh Mdoe, Kimeli Arap Kimeli, Shisia Wasilwa, and video editors Mumbi and Lilian. This was after they had allegedly received an amount from a politician to avoid airing an embarrassing story on him. However, the suspension was later lifted and they resumed work.

The talented Joey Muthengi is a host at the 10 over 10 show. She is a rapper, blogger, actress, and TV presenter. She is siblings with the famous gospel rapper, Holy Dave. With a bachelor’s degree in Communication and Business Management, Joey has hosted various shows including the Tusker Project Fame singing competition, Capital FM show ‘Hits and Not Homework, ‘Sugar and Spice’ family talk show, The Power Breakfast show, and also worked as a host at Ebru TV.

Willis Raburu is a talented presenter on the 10 over 10 show, which he co-hosts with Joey Muthengi. He is also a host of the Day Breakfast Show. Raburu started a Bachelor’s Degree in Information Science and a Bachelor of Science Degree in Communication and Media studies at Moi University. His career started as an intern at K24 before graduation.