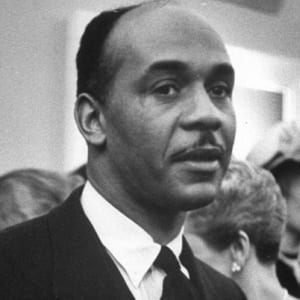 ‘Invisible Man’ is a remarkable piece of work written by Ralph Ellison in 1952 whose concepts are still relevant and informative in today’s society. Ralph Ellison was an African American writer who lived in the 20th century and in the course of his life producing award-winning literary work. This article explores his life, passions, career life, and personal life details.

He was born on March 1, 1914, in Oklahoma, USA. His late father was a coal and ice deliverer who passed away after an accident at the work site took his life. Ralph’s mother Ida was left to raise their two children Ellison and Herbert single-handedly.

The young Ralph attended schools in Oklahoma and grew up as a Renaissance Man, someone who derived their deepest identity from culture and intellectualism.

After school, he started off as a merchant marine cook during the second world war which shaped some of his later writings. One of his early career stages was when he worked as a writer and researcher at the New York Federal Writers Program. He was exposed to other writers such as Langston Hue before Ralph, later on, went into essay and short-story writing. It was at this time that he was made the managing editor for The Negro Quarterly, a publication that talked about issues of race and how life was for the Black man socially, politically, and economically.

Over his lifetime, some of his published works include Flying Home (a collection of short stories), Going to the Territory(An essay collection), Shadow and Act, and Juneteenth which was released posthumously in 1999. His writings focused on the culture of the Blacks, racism, and other sensitive matters regarding race.

Ralph was always a young man of culture exploring the arts, literature, and music in its fullness. He used to play the cornet, the trumpet and was a student at Tuskegee Institute in Alabama where he studied music. He hoped to one day compose symphonies and be a full-time Musician.

In his marriage life, Ralph married Fanny McConnell in 1946 staying together until his death in 1964 when he succumbed to pancreatic cancer.