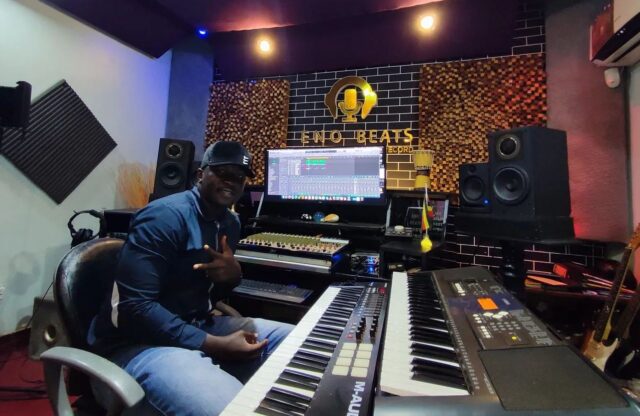 From the time artists like Jose Chameleone and Radio and Weasel were ruling the Ugandan music industry, Ugandan music has maintained its unique identity. The industry has now evolved and adapted new music styles from other parts of the world.

Enock Kisakye is an award-winning Ugandan music producer. He was nominated as the ‘Best producer in East Africa’ at the Afrima awards. The producer has worked with artists such as Eddy Kenzo, Bebe Cool, and Sheebah to produce hit songs.

2. Daddy Andre on The Beat

Apart from being a music producer, Daddy Andre is a singer and songwriter. His real name is Andrew Ojambo. Some of his songs include; ‘Sikukweeka’, ‘Tonelabila’, and ‘Maama Wabana/ Do’ among others. He has also worked with artists such as Bebe Cool, John Blaq, and Lydia Jazmine.

Read: Best Music Producers in Tanzania and their Projects

Fizol has been nominated as ‘The best music producer’ on awards such as AFRIMMA awards, Hipipo, and Buzz teeniez awards.

Born Martin Musoke, Artin producer is one of the biggest producers in the country. He has worked with many artists including; Chozen Blood, Fik Fameica, and Rickman among others. Some of the hits he produced include ‘Yaka’, ‘Kutama’, and ‘Omu bwati’ among others.

Diggy Baur is one of the longest-serving producers in the Ugandan industry. He has worked with artists such as Spice Diana, Chameleon, and Pallaso among others. Some of his songs include ‘Kiboko fire’ by Chameleon and Kalifha Aganaga.

Ronald Matovu, famous as producer Ronnie is one of the top music producers in Uganda. He has worked with artists like Sheebah, Vinka, Chameleon, Bebe Cool, and Eddy Kenzo among others. Some of the songs he produced include; ‘Wire wire’, ‘Mateeka’, and Ssemyekozo to mention a few.

You have probably heard the words “Bomba made my beat” in some Nigerian songs. Bomba has produced songs like ‘Sharpshooter’, ‘Jjangu’, ‘Love Panic’, and ‘Yitayo Ondabeko’ among others. He has also worked with artists like Vinka, Winnie Nwagi, and Azawi to mention a few.

Dan Magic is among the most talented Ugandan music producers. He has worked with artists such as Bobi Wine to produce several hit songs in the country.