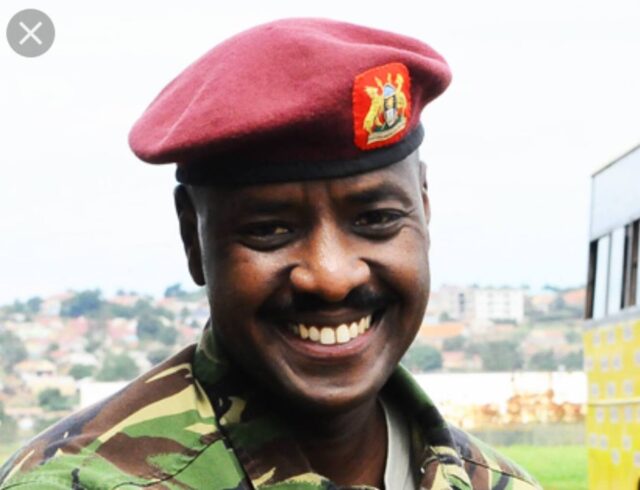 Muhoozi Kainerugaba is a Ugandan Military Commander who is currently serving as the commander of the Land Forces of the Uganda People’s Defense Force (UPDF). He is the son of the President of Uganda, Yoweri Museveni.

Muhoozi Kainerugaba was born on April 24th, 1974 in Dar es Salaam. His parents are Yoweri Museveni and Hope Rwaheru.

For his education, Muhoozi attended schools in Tanzania, Mount Kenya Academy in Nyeri Kenya, and in Sweden. Later when his father became president, he went to Kampala Parents School, King’s College Budo, and St Mary’s College Kisubi where he graduated in 1994.

It is not clear whether Mainerugaba holds any degree. He, however, attended the University of Nottingham from 1996 to 1998 where he supposedly studied for a BA in Political Science Degree which is supposed to be for three years and not two.

Muhoozi was first admitted to Egyptian Military school for company and battalion commanders courses before going to Kalama Armoured Warfare Training School. Later in 2007, he joined the United States Army Command and General Staff College at Fort Leavenworth in Kansas for a one-year course.

He then went on to successfully complete the Executive National Security Programme at the South Africa National Defence College.

In 1999, Muhoozi’s career kicked off as an officer cadet at the UPDF. Even though there was opposition from some of Museveni’s NRA comrades like David Sejusa and Kizza Besigye, Muhoozi rose ranks in the UPDF.

Muhoozi was promoted to colonel in September 2011, and later to Brigadier General in August 2012, when he was also appointed Commander Special Forces Command. Between 2017 and December 2020, Muhoozi served as the Senior Presidential Advisor on Special Duties.

President Museveni promoted Muhoozi to become colonel, the second highest rank in the UPDF army after the general in February 2019. In June 2021, Muhoozi was appointed to become Commander of UPDF Land Forces.

Muhoozi’s net worth is estimated to be $2 million. He earns most of his wealth through his career in the military.