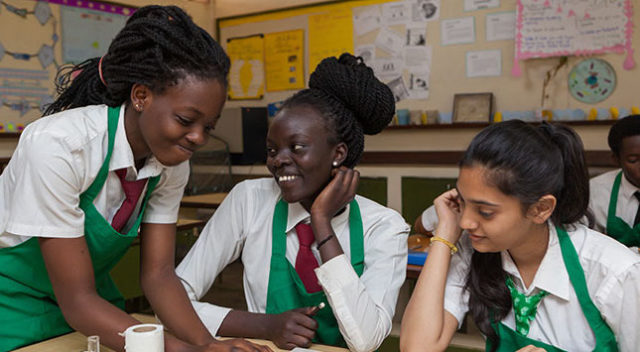 Nairobi, the capital city of Kenya boasts to host the top most private schools that are believed to be the cream of the academicians nationally and beyond. Amongst the superlative private schools include;

Established in 1961, the institution is a private co-educational, multi-cultural day secondary school. It is located in Westlands, along Waiyaki way, seven kilometers from Nairobi city Centre.

The school offers the KCSE, IGCSE and GCE curricula. In July 2009, it became a fully certified center with the University of Cambridge International Examinations, and the first cohort of IGCSE students sat for IGCSE examinations in 2010.

Examinations and their results are now a major part of the educational process. Higher institutions of learning currently look not only at A Level results but also at IGCSE results when offering students, a place in their institutions. The international system is unique in that the student’s final three years of school is dominated by examinations.

Aga Khan endeavors to provide the students and their parents with an environment where ideas are exchanged for the betterment of the student’s welfare. We believe very strongly that it is a system that encourages inquisitiveness, rational inspiration, fun, and challenging demands, it also allows a holistic development of a character that will allow success beyond the class room.

In addition, the institution offers robust academic teaching on a campus with facilities that are the envy of many schools, the Aga Khan High School, Nairobi strives to impart an education that will enable students to become top performers nationally and internationally, by adapting the best international and contemporary teaching and learning as well as educational leadership philosophies.

The school has a strong ethos based on values and spirituality; we strive to develop students who will exhibit:

Strathmore is Kenya’s first multi-racial school, established in 1961 in the Lavington area of Nairobi. It began as a residential Sixth Form College offering British-styled A-level courses and in 1963 switched from the Cambridge School Certificate Examination to the London GCE.

In 1977 it became a full-fledged Secondary school. In 1988, the school began offering education under the KCSE – Kenya Certificate of Secondary Education – curricula which it follows to date. The first batch of Primary school students (6-7-year-old) entered in 1987. It no longer has any boarders.

The school uniform consists of a cream shirt, mid-grey trousers, grey socks and black shoes. The tie has black, white and blue stripes. The blazer (worn by high school students) is navy blue, normally worn on Mondays. The sweater is sky blue and does not have the school badge on it.

‘The Scroll’ was first published in 1963. The last edition was published in 2006 in order to make way for an interactive DVD called The Scroll Digital (nicknamed ‘digital’). A return to the past is happening this year with a school magazine being published for the first time in 10 years.

In 1986 a book titled ‘Strathmore Remembered’, with the 25-year history of the school was published.

Since 1961, only two people have been awarded both Honors, James McFie in 1963 and Andrew Lumumba in 2012. Every year the top three [in primary] and top five [in secondary] all-rounded students in each class are awarded the school pennant. The school does not award any colours to students.

The rugby team is known as The Bandits. In 2008 they were the winners of the St. Mary’s Blackrock Festival, the biggest school’s rugby festival in Kenya. However, they were beaten by their rival Saints, the eventual winners in the semi-finals of the 2010 edition of the festival. They wear striped shirts of black, blue and white.

Other teams include the Pirates (basketball), the Stallions, who renamed themselves the Falcons in 2016 (volleyball), who won the Nairobi provincial league several times in the 1970s, the Stalwarts (cricket) and the Sharks (swimming).

The doctrinal and religious formation in Strathmore is entrusted to Opus Dei, a prelature of the Catholic Church.

Strathmore School consistently ranks as one of the top private schools in the KCSE and was ranked the second-best high school (nationwide) based on 2006 Kenya Certificate of Secondary Education and the second best private high school in 2013.

Located in Kawangware, Dagoretti constituency in Nairobi County, Kenya Precious Blood is about 7 km to the West from the city center. It has a population of about 600 students drawn from every corner of the country. The school has three streams in every form. It is sited on a ten-acre plot and consists of class rooms, hostels, dining hall, a small field for sport, teachers’ quarters, laboratories and staff rooms.

The Catholic nuns of the order of Precious Blood Sisters established the school in 1964. Its enrollment was meant for children of indigenous from the immediate vicinity of Kawangware, Riruta and Uthiru who had been affected by the Mau-Mau struggle.

It is a public school run by the Kenyan Government, The Precious Blood Sisters, Board of Governors and The PTA. The school started as a single stream school but today it has three streams. The students are about 580. Initially it was not a boarding school but with the increasing numbers it was expanded and dormitories were made.

Loreto Convent, is a girl’s day school, located in Lavington location, Nairobi County. The school is located in a serene environment in Nairobi’s Lavington area. It was founded by the Loreto Sisters in 1921. The school is a girls’ school offering both the Kenyan 8-4-4 curriculum (in primary and high school) and the British I.G.C.S.E. Curriculum (high school only) of education. Also, high school offers boarding and day facilities.

In 1921 Loreto Pioneers started Loreto in Kenya and built another one in Msongari. The building in which Msongari first functioned as a school still exists today. It consists of the two school offices, the two parlous and the two classrooms. The first arrival was Eva Blowers. She was wearing a navy tunic and a white blouse. T

his become the Msongari Uniform. The pupils also decided on the choice of red for the blazer and jumper. In 1929 the tennis courts and the concert hall were built. Then in 1936, the second story was added to the quadrangle.

Established in 1995 as a Boys boarding school Sunshine is located in Mugumoini location, Nairobi County by the retired president Honorable Daniel T. Arap Moi. The school is managed by Patron, Deputy Patron, Board of Directors, PTA and school Administration. The school is science-oriented with the aim of meeting the needs of the scarcity of boys boarding facilities in the county.

In 1998 in the school first featured in the sixth position Nationally at its first K.C.S.E entry. The school has not only excelled in Kenya National Examinations (K.C.S.E) by being in the top 10 several times but also produced the best students in the county and county in 2002, 2003 and 2004 respectively.

The school follows the 8-4-4 system of Education and children are prepared for the K.C.S.E. (Kenya Certificate of secondary Education). In the secondary, we take care of adolescence preparing them for higher education, vocational training and adulthood.

The curriculum contains a well-balanced introduction to a wide range of subjects and is later divided into a group of core subjects that are taken by all students, and another group of subjects from which each student must make a choice. Being Science based i.e. all students do all the three science subjects.

English, Kiswahili, Mathematics, Chemistry, Physics, Biology, Geography are all compulsory from Form I to IV. OPTIONAL SUBJECTS:-History (Form I & II) C.R.E. (From I to III), Computer studies, Business Studies (Form I to IV): At the end of Form II, students make the choice of their optional subjects (choosing only one either Computer or Business Studies).

In the secondary school, the intellectual demands are greater than in the primary level as students gear themselves for KCSE. The school therefore takes sufficient care with well laid down routine of unit tests, random tests, common tests and end of term examinations which apart from deepening their knowledge of various subjects, help them to learn the techniques of answering questions.

During assemblies our students, teachers and community come together for the unification and enrichment of school life. The assemblies are done in English and sometimes in Kiswahili. Our School assemblies are well organized and used by teachers to:

The School was established in the Parklands area of Nairobi in 1939 from Blackrock College in Dublin, Ireland. In 1946, the school was moved to a temporary structure on a 34 hectares (85 acres) site on the land belonging to the St. Austin’s Mission in the Muthangari area of Westland.

School buildings were completed in 1954, including the twin towers that stand at the school’s quadrangle and the St. Austin’s Catholic Church, which sits beside the school’s parking area. In between the towers is the staff room where teachers convene for meetings and take their breaks, which used to be the school’s library.

From the outset, Saints has always had a combined primary and secondary school. Although only boys are admitted to the primary and secondary schools, girls (along with boys) are admitted to the International Baccalaureate diploma course which is a post- O-level programme offered by the school since 1982. Entrants are chosen on the basis of their KCSE and IGCSE results. The school year runs from January to November.

Students are encouraged to participate in extracurricular activities, which include sports, clubs, music and drama. All the school’s sports teams are nicknamed “Saints”, also the school’s nickname.

In conclusion, these remain the dream school for anyone interested to acquire quality education. Make your choice today.