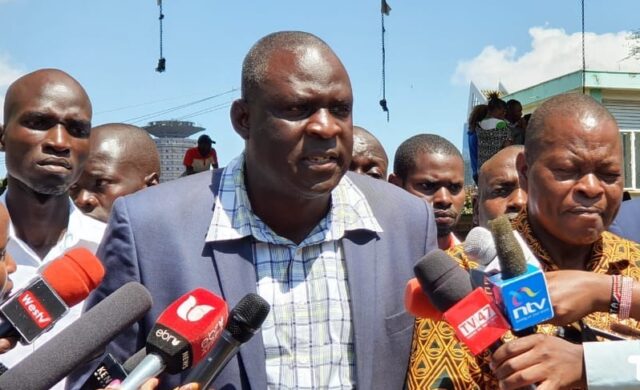 The KUPPET union national officials have disengaged activities in the office for the better part of this year to pursue National politics directly or indirectly. This has left branches in very difficult moments in dealing with teachers’ issues.

The inconsistency in money disbursement has crippled most branches activities. The officials who survived nomination exercise are currently eyeing parliamentary seats different parts of the country.

Branches have not received dues for two months now crippling activities. It’s alleged that the KUPPET National officials have diverted the cash to use in politics across the country. The branch officials cannot complain publicly for fear of intimidation.

The cartel is deep rooted with wings across many institutions thus moribund. They act with impunity but unfortunately there’s nothing the branch officials can do to redeem themselves.

Read: A list of all Degrees owned by Prof. George Wajackoyah

Now that they are in bed with the government, no one can raise any alarm against them. According to the sources, the situation will remain that way till October this year.

The Secretary General was contesting to become governor of Homa Bay County but dropped out of the race in favor of Hon. Gladys Wanga. Mr. Akello Misori is financing the ODM candidate according to the sources.

The Branch Officials are holding their horses and praying that most of them win the election because if the contrary happens then it will take long for resumption of delivering union dues to branches.

Now that most of them will wish to recover the lost money in the election. “Actually we are praying for their success because the situation might become worse if they lose”, an official who sort anonymity said.