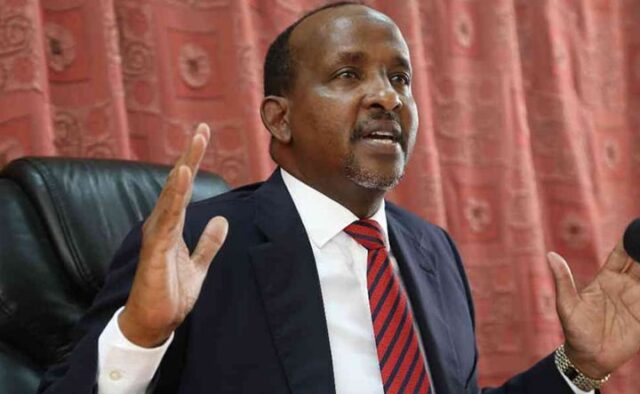 Members of Parliament (MPs) in Kenya are charged with the responsibility to represent citizens in parliament, highlighting their pleas, passing legislation and hold leadership accountable. This article outlines top 10 Kenya’s wealthiest and richest MPs.

Honorable Aden Duale is among the wealthiest MPs in the country. He represents the people of Garissa Township Constituency and served as majority leader of the National Assembly. With an approximate net worth of Kshs 2 billion, he is one of Kenya’s richest politicians representing the citizens in parliament.

Honorable Kimani Ichung’wah representing the people of Kikuyu constituency in parliament. The Alliance High and the University of Nairobi alumnus is one of Kenya’s richest MPs worth millions. Hon. Kimani is worth an estimated Kshs 500 million.

Hon. Mohamed Ali is Nyali Constituency’s member of parliament. He won the seat on an independent ticket and has served the people remarkably well. He is a former news anchor on KTN and is one of the richest politicians worth millions.

Hon. Mariru Kariuki of Laikipia West constituency is among Kenya’s wealthiest members of parliament. The trained lawyer has a variety of investments that have built his wealth worth millions. Hon. Kariuki is worth an estimated Kshs 100 million.

Hon. Mawathe of Embakasi South has had an extensive career in Kenya and Texas in the US. he is among Kenya’s richest MPs with investments in real estate and other business ventures. He is currently worth Kshs 90 million.

The iron lady, Hon. Millie Odhiambo of Suba North is among the wealthiest political figures in the country. She is a trained lawyer with an extensive background of legal knowledge from various institutions locally and abroad. She is worth an estimate Kshs 80 million.

Hon. Shollei of Uasin Gishu constituency is among Kenya’s wealthiest political leaders and is a lady to watch. With investments in agriculture, she has grown to build her wealth from different avenues including poultry and cash crop farming. She is currently worth Kshs 60 million.

Hon. Benard Okoth of Kibra Constituency is one of Kenya’s wealthiest political leaders. With a background in other non-government experiences, he has a unique combination of circumstances. He is one of the wealthiest MPs in Kenya with an estimated net worth of Kshs. 50 million.

Hon. Arati of Dagoretti North constituency is one of Kenya’s wealthiest MPs who has been of service to the people. He is particularly interested in addressing Nairobi-specific issues such as pollution and congestion. He is currently worth millions.

Hon. Sabina Chege of Murang’a is a leading Kenyan political leader whose wealth is credited to a variety of investment options and has become one of the richest. She is worth an estimated multi-million monetary value.