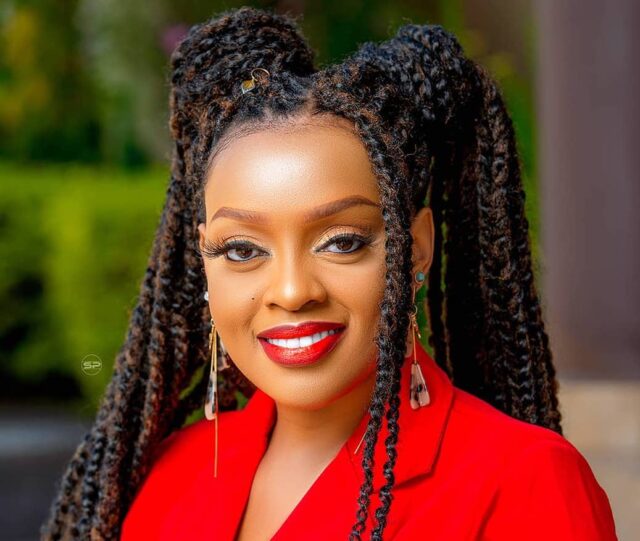 Diana Nabatanzi is a Ugandan media personality in radio, television and social media as an actress, show host and entrepreneur. This article looks into her biography giving details on her background, academic qualifications, career journey and personal life.

The actress and radio show host does not reveal her age to the public. She leaves the public speculating, some guessing that as at 2021 she is in her early thirties. Her parents are Fred Magala and Rosemary Nanteza have four more children, Diana’s siblings.

She attended St. Elizabeth Primary School, St. Mary’s Nsumba and St. Joseph schools for her primary and secondary school education. Her alma mater is the Kampala University where she pursued a program in Journalism and Mass Communication. She further pursued Business Administration in Ndejje University.

Her journey in movie-making and acting traces back to her younger years when she would act in local dramas and skits. She then honed the skill at Aromatic Films where she was further trained and began acting movies such as HouseArrest, Sikola and Bunjako. She came into the limelight in 2017 after making an entrance into Bukedde TV acting in Nawolovu, a drama television show.

She also starred in ‘Mistakes Girls Do’ alongside other actresses which became a popular series in Uganda. Media-wise, she made an entrance into radio hosting at Prime Radio, further moving to Uganda Broadcasting Corporation and Pearl Radio. She currently hosts a morning show on BBS terefayina wangula and a wedding show titled Ye Wange at the same corporation.

Diana is a very private individual who keeps her affairs as away from the public as possible. She is speculated to have two children, claims that she has denied in the past. She further does not reveal information on her dating or marriage life.

She runs a foundation named Tanzi Foundation which is dedicated to sourcing for donations and contributions around the world to address the needs of the disadvantaged in Uganda such as primary health care, reproductive health care, vaccinations and educational needs.

Diana’s net worth is thought to be over $210,000 and information detailing her asset portfolio is yet to be determined. She pockets a decent salary from her journalism job.