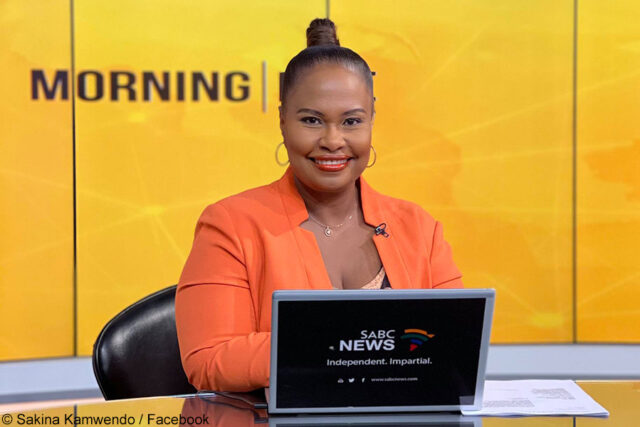 Sakina Kamwendo is one of South Africa’s most acclaimed journalists known for her lively presentation of news and engaging audiences in a unique way. From her time in radio to screen, she has managed to steer a successful career that has won her accolades and awards for the shows she does. This article takes a closer look at Sakina’s life highlighting her career achievements and personal life details.

She was born on 26th September in 1978 in South Africa where she has continued to live and establish her career.

The bubbly lady attended Stanwest Secondary School where she completed her education successfully securing a place at the University of Witwatersrand where she pursued Journalism as her major. Her time at the university was marked with participation in extracurricular activities such as the journalism club that would be involved in magazine publications and releases.

Her career began at Eldorado Park where she landed an entry-level job at Radio Eldos. Sakina Kamwendo delivered exceptionally and would soon be on bigger platforms. She then got a job at Maths Centre doing radio until she got an opportunity to run an overnight show with Talk Radio 702. Being one to chase after her goal, by all means, she held down both jobs and did well at both.

After some time, the overnight show then went into early breakfast and weekend shows. Once again, she did well earning her a lucrative position as Traffic Reporter on the David O’Sullivan Show.  It was only after this big break came that Sakina was able to quit her job at Maths Centre dedicating her full attention to the show.

Moreover, her career has also had her host Metro FM talk with Sakina, a show that won her two consecutive MTN Radio Awards in 2013 and 2014 for Best News and Actuality Show. Later on, came AMLive with SAfm that she hosts between 0600hrs and 0800hrs on weekdays and the 1200hrs to 1300hrs weekday Update at Noon shows.

Kamwendo is married and has three children after she lost a daughter.

Sakina Kamwendo Net Worth and Property

Her net worth from her work is valued at approximately $200,000.