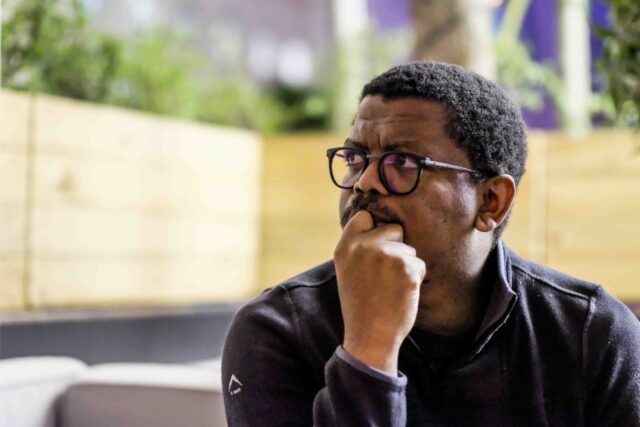 Lukhanyo Calata is a popular and famous journalist in South Africa who has used the media to push for change, reforms, and freedom. He in his own right is an activist and this article looks into his biography highlighting his life journey so far and the achievements he has managed to make.

The journalist was born in 1982 in Cradock, Eastern Cape, South Africa. His father, the late Fort Calata, was an anti-apartheid activist who was assassinated by the government in 1985. This would later form the basis of a book Lukhanyo would co-author with his wife. Growing up, he was always in the political space as his grandfather Reverend James Calata served as ANC Secretary-General and was a Rivonia trialist. Evidently, his upbringing led him to have a keen eye on the political environment and the happenings therein.

He pursued Journalism at the Peninsula Technikon college completing his national diploma in 2004.

His early career steps can be traced back to July 2002 when he worked at P4 radio station as an intern news reporter. He would later be retained on the station and promoted to co-host and produce True Expressions with Koketso Sachane. By this time, he had moved to Cape Town to pursue his career goals.

His career has also seen him working as a news correspondent at e.tv in a talk show named eNews Primetime. eNews Primetime is a popular weekday show that runs from 1800hrs to 1900hrs discussing current and trending affairs in the political, social, and economic arenas in South Africa.

Many South Africans and indeed other Africans too, know Lukhanyo Calata for being one of the SABC 8, a group of journalists that defied Hlaudi Motsoeneng’s policy to deter broadcasting of the violent protests in the nation prior to the 2016 general elections. The group consisted of Lukhanyo Calata, Thandeka Gqubule, Suna Venter, Foeta Krige, Jacques Steenkamp, Vuyo Mvoko, Busisiwe Ntuli, and Krivani Pillay. Standing firm for their freedom of expression and communication, they were said to be fired, an allegation that Motsoeneng fervently denied.

Apart from his journalism career on screen and radio, Calata is also an actor and a published author. In partnership with his wife Abigail, the couple wrote “My Father Died for This“, a book that speaks about the legacy of the anti-apartheid activists and how society stands in the present day.

He married Abigail Calata, a fellow journalist who worked at Beeld after graduating from Stellenbosch University with a Bachelor of Arts Journalism degree. The couple is blessed with one son.

Net Worth and Property

Lukhanyo’s net worth is yet to be ascertained as it is not public knowledge yet.