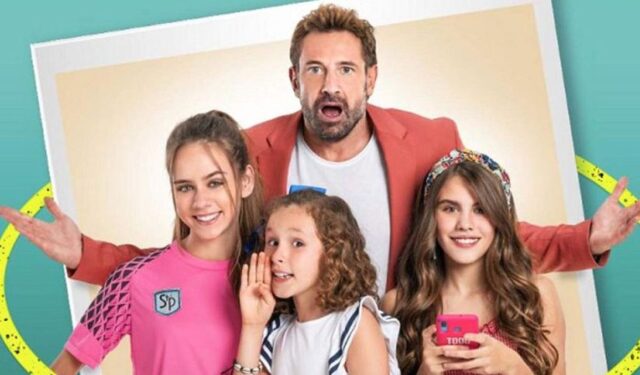 An entertaining Mexican Telenovela known as Soltero con Hijas (Single Dad) is set to air soon on a popular Kenyan television station known as Citizen TV. The soap opera revolves around the life of Carlos, a spinster who was a womanizer. As time went by, fate led him to single-handedly take care of 3 of his nieces who had lost their parents.

With so much on his plate, he dearly needed a helping hand. This desperation led him to seek help from Victoria, his immediate neighbor, and he falls in love with her soon after. The single dad telenovela depicts how Victoria’s dad tries to come in between their relationship.

Single Dad was originally acted in the Spanish Language, having being initiated in Mexico. It has since been translated in other languages such as English. The producers were Juan Osorio (exec. Producer), Ignacio Ortiz and Roy Rojas, the directors were Aurelio Avila and Gabriel Soto whereas the writers were Santiago Pineda, Hugo Moreno and Pablo Ferrer. The show, which was officially released on 28th Oct 2019, currently has only one season out with eighty-seven episodes.

This is the first time Nicolas and Victoria meet. The meeting point is a cake house where Nic had gone to look for a cake for his niece Sofia, who was turning a year older.

This is where Antonio passes on in a car accident. Later on, Cristina dies on her death bed as the girls say their goodbyes.

After the burial, Nico is willing to stay with his nieces who had lost their parents to the road accident.

During their breakfast, Ileana and Victoria meet Mauricio, who had another lady and the two seemed too cozy together. As Nico is trying to take care of the girls, he gets overwhelmed with the fees and he is considering having them change schools.

The 3 girls are being taken by Nico to see their new school. Camila and Juan Diego come face to face.

Here, Vic and Nico get to discuss on the incident that Vic was in. Sofia later opens up on the escape of her sisters.

A lonely Vic is consoled by Ileana.

Vic is being pushed by the captain to get wedded. This is the day where Nico requests Vic for a helping hand.

The two lovebirds, that is Nico and Vic, go clubbing.

Nico is paid a visit by a social worker known as Leona so as to see if he is fit for the role of having the girls under his care.

Nico and Vic get cozy with each other and the two later kiss.

The girls go in for the audition of Juliet after which an infection engulfs the hotel.

Vic finds out that she will not be able to have kids.

Here, Nico is questioned by Rodrigo about Vic.

Alexa has severe skin issues that forces her to consult a dermatologist. Vic apologizes to Nico.

There is a fire at Ileana’s house on the night that she invited Vic over.

Rodrigo confesses his love and hate to Vic. Later on, Vic and Nico wed.

Vic and Nico get married and the two go in for a kiss.

Masha reaches at Acapulco for business purposes at the hotel.

Here, Masha and Vic come face to face with each other.

There is a fight between Rodrigo and Vic.

Vic and Nico confess their love to each other.

In a bid to help recover Alexa, Vic proposes marriage to Nico. Nico is seduced by Masha.

It is known that Masha is the daughter to the Captain.

The day of the judgment is here.

Alondra is being asked by Nico to help save the girls. Also, Isabel pops a beautiful baby girl.

In an attempt to detach him from Vic, Masha flirts with Nico.

Victoria has proof that Masha and Nico kissed. She approaches him with the picture.

Juandi pours his heart out when it comes to his love for Camila. Ileana is put under arrest.

Here, Nico express regret to Vic and states that he will no longer be lying to her.

Nico does his best to save Alexa from her adaptive parents. On the other hand, Vic has an agonizing loss.

Here, Nico gets together with Vic.

Vic gets confronted by Rodrigo for her thunder with Nicolas.

Mrs. Alondra for the first time gets to tell Nicolas why she went so far away from the girls.

Ileana steps out of prison.

Nicolas gets pounce on by a rat in the cellar.

Ridrigo comes to find out that he is being spied on.

Victoria is being fought for by Nicolas and Rodrigo.

Here, Camila and Hugo go in for their first kiss.

Despite Vic and Rodrigo kissing, Vic asks for time.

Vic demands for a DNA test after Masha approves to becoming the daughter to Claudia.

Vic and Rodrigo have a good time during Christmas.

Nicolas becomes closer with the girls and their bond strengthen, regardless of brushing shoulders with Alondra.

Even though she was worried about the outcome of the DNA test, the results come out positive, confirming that they are indeed sisters.

Nico comes clean to Masha and tells her that he can never be in love with her.

Nico gets confronted by Ileana who wants to know why he broke Vic’s heart.

People come together to celebrate the New Year.

Alexa and Camila bring their love relationships to an end.

After being attacked, the captain is found unconscious by Nicolas.

The girls are kidnapped by Masha and El Calamal. The two go ahead and hurt Nicolas.

The Paz sisters are being rescued by Vic and Nicolas.

Here, Nic informs Vic that he loves her so much and is ready and willing to show her that.

Even after visiting Masha in jail, Vic is not willing to forgive her.

Camila wants to be a changed person in all aspects of her life. Alexa apologizes to Vic.

Camila hurls insults at her grandma.

After Nicolas plans a nice proposal, he puts the ring in a cake, which Vic swallows, something that leads her in hospital.

Nico asks for Vic’s hand in marriage at La Quebrada.

Rodrigo confesses his love to Ileana.

After the captain visited her in prison, Masha asks him for forgiveness.

Since their wedding date is set, Nicolas and Vic celebrate with their family.

A mixed bachelor party of the two takes place, where Masha sends them a wedding gift.

The newlyweds are in a yacht, having the time of their lives.

Rodrigo declares his love to Ileana.

The first night as a family after the wedding is hard for Nic and Vico.

Despite them being legally united, Nico is not prepared and ready for a new child.

The 3 girls stress Nicolas and Victoria.

Juve quits his job at the hotel.

Emilio Marcos presents Adrian as her lover at the party.

Ileana and Rodrigo get cozy and they kiss.

Vic comes across Nicolas in a sensual photo shoot and this leads to her punishing him. Rodrigo asks Ileana to be his girl.

Alexa and Samuel are expelled from school.

Vic finds out that she is expectant.

Vic and Nicolas deliver the news of Vic’s pregnancy to friends and family. However, Sophia is not so happy about the news. Masha is so close to dying.

Vic meets Masha and she accepts her apologies.

Juandi and Camila get cozy on the boat where they are so much in love.

Masha kills the doctors and she escapes from the hospital. We find out that Nicolas and Vic are expecting twins.

El Calamal tries to kill Ileana, but Vic comes to her rescue, risking her life and those of her unborn twins.

Masha wants to revenge against Nicolas and Vic and she steals her son from the hospital.

Vic and Nicolas are so desperate for their child.

Ultimately, all the families will end up happy after Masha is drugged by Coral and Juandi is kidnapped by El Calamal. A party is thrown.