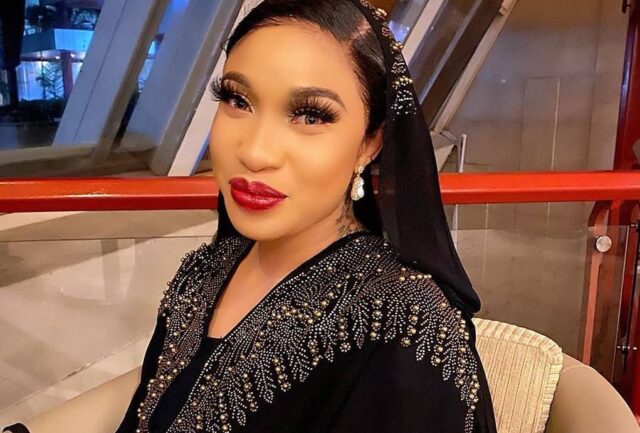 Tonto Charity Dikeh is a Nigerian actress widely popular and famous for her roles in Nollywood films. She is one of the most familiar faces in other countries that enjoy Nollywood films as much as Nigeria does. This article looks into her biography highlighting her background, career journey and personal life.

Tonto is thirty-six years old as at 2021 and hails from Port Harcourt in Nigeria. She was born on 9th June in 1985. Her family comprises four siblings and her father and step-family following the passing of her mother when she was three years old.

Tonto is an alumnus of Rivers State University of Science and Technology where she pursued an Engineering program.

As a career woman, Tonto wears many hats as an actress, musical artist, and model. She has written songs like ‘Hi’, ‘Jeje’ and was for a period of time signed with D’banj’s DB Records. She has also been featured in musical videos and currently signed to Poko Entertainment.

Her acting career in Nollywood took off after her role in the movie ‘Dirty Secret’ made her the talk of town. She played the role of a lady of nontraditional nature in her parts in adult scenes portrayed in the movie. This attention was a necessary part of her career as she began showing up in more movies and getting a bigger fan base. She has since then featured and starred in movies and films including ‘Guardian Angel’. ‘Rush Hour’. ‘Battle of the Queens’ and ‘Throne of War’.

Tonto was married to her son’s father, Churchill Oladuni between 2015 and 2017. Currently, she is married Prince Kpokpogri – a celebrated Nigerian politician, anti-corruption activist, philanthropist and publisher. Tonto is a humanitarian and philanthropist committed to supporting the underprivileged in society through The Tonto Dikeh Foundation.

Tonto Dikeh Net Worth and Cars

Dikeh is one of the highest paid Nigerian actresses in Nollywood.  She owns a fleet of latest cars including a 2017 Lexus 570,  a Mercedes Benz 4matic c300, a Bentley Continental GT, Toyota Prado TXL and a 2016 GMC Yukon XL.

She is also engaged in various endorsements and brand ambassadorship. She has thus far endorsed skin care Brand, Pels International, Numatville property firm, Zikel Cosmetics among more. These boost her income as they are high value partnerships. She is currently valued at approximately $2 million.