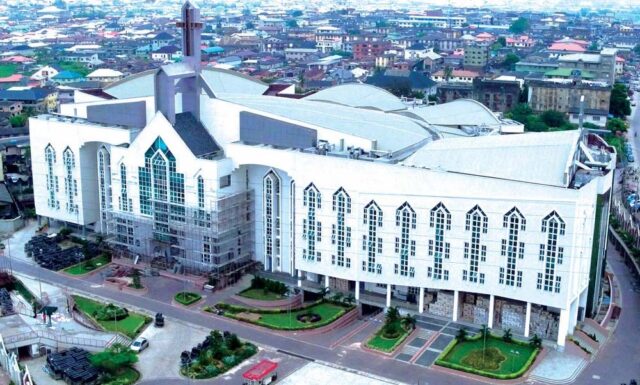 Christianity is the biggest religion in Africa. Being the most Christian continent, Africa has the highest number of churches in the world. These churches vary in size and population. We did our research on the biggest churches in Africa in terms of attendance, and below is the list;

The Deeper Life Bible Church currently stands at the top among  the biggest churches in Africa. It has a weekly attendance of over 65,000, and has its headquarters in Lagos (Gbagada), Nigeria. It was started in 1983, by former Mathematician, William Folorunsho Kumuyi after some students asked for a reading from the scriptures.

He formed a bible study with 15 university students which later grew to become a church. It has since grown to become the largest church in terms of sitting capacity, as it can accommodate around 30,000 people.

With a weekly attendance of 50,000, the Living Faith Church is the second largest church in Africa. It was founded in 1983, by Pastor David Oyedepo. The church has since experienced growth and has branches in over 65 countries. It has its headquarters in Lagos, Nigeria.

The Redeemed Christian Church of God has its headquarters in Lagos, Nigeria. It has a weekly attendance of 50,000. It was founded in 1953 by Josiah Akindayomi and has since grown to have branches in different parts of the world.

Apostolic Church of Lagos in 1906, and has since experienced growth. It has a sitting capacity of about 10,000 but receives a weekly attendance of over 40,000. It is located in Lagos (Ketu) in Nigeria, and has branches all over the world, with over 15,000,000 attendees.

Read: Top 10 Richest Churches in the World and their Net Worth 2022

With a weekly attendance of over 35,000, the United Family International Church is the biggest church in Zimbabwe. It is located in Harare, Zimbabwe, and was founded in 2006 by Emmanuel Makandiwa.

Located in Bloemfontein in South Africa, CRC Christian Church has a weekly attendance of over 32,000. It was started in 1994 by pastors At and Nyretta Boshoff. The church has since experienced growth and is still receiving new attendees every week.

Ayo Oritsejafor founded the World of Life Bible Church in 1987. It is located in Ajamimogha Warri in Nigeria and has a weekly attendance of more than 30,000.

The church was founded in 2002 by Pastor Lazarus Muoka and some volunteers. This was after the pastor claimed to have a vision from God in 1994, instructing him to build a church.

Currently, the church has more than 300,000 branches all over the world, with its headquarters in Lagos, Nigeria. It has a weekly attendance of 30,000.

Located in Lagos, Nigeria, Christ Embassy church has a weekly attendance of 30,000. It was founded in 1990 by Pastor Chris Oyakhilome, and has since grown to have many branches in different parts of the world.

The church also owns Loveworld Publications, a publication house that published its first book, ‘Recreating your world’, back in 1995.

With a weekly attendance of 30,000, the church is number ten on the list. It was founded in 1996 by Alan Platt in Pretoria, South Africa. The church has since grown to have branches in countries like Germany, the UK, and New Zealand.

In addition, it is associated with nonprofit organizations to help with various challenges. The name ‘Doxa Deo’ originated in two languages. ‘Doxa’ means ‘Glory’ in Greek, while ‘Deo’ means ‘God’ in the Latin language.

Top 10 Richest Presidents of Africa and their Net Worth 2022