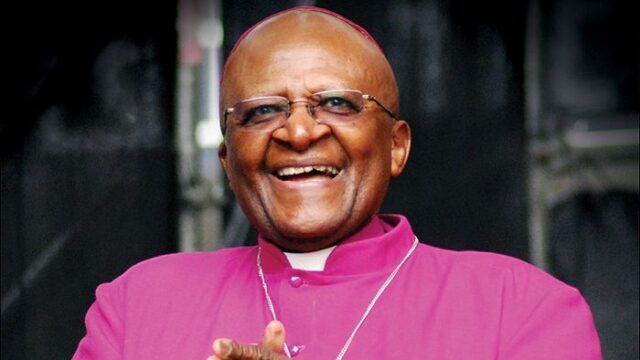 Archbishop Desmond Tutu, a great South African and South Africa’s last surviving Nobel Peace Prize Laureate, has passed on in Cape Town at the age of ninety. His passing has cast South Africa and the whole world in deep sadness, feelings of despair, and remembrance of the legacy he lives behind. In honor and celebration of his life’s work, this article looks into his biography highlighting his background, career, and personal life.

The global human rights activist was born in Klerksdorp in the then Western Transvaal Union of South Africa on 7th October 1931. Tutu was born to a Motswana mother and Xhosa father. He celebrated his 90th and last birthday at the St. George’s Cathedral on 7th October with thousands coming to celebrate with him.

Initially, the archbishop thought he would grow to be a doctor after receiving a letter of admission at the University of Witwatersrand but was unable to proceed due to his parents’ financial constraints. He instead went on to receive a government scholarship to pursue Teaching at Pretoria Bantu Normal College in 1951.  At the institution, he was actively involved in extracurricular activities particularly the debate and cultural society. It was during one of the debating events that he met the late Nelson Mandela, who was at that time a lawyer.

Desmond Tutu also obtained a Bachelor of Arts degree from the University of South Africa.

Thereafter, he enrolled at the St Peter’s Theological College in Rosettenville, Johannesburg. After quitting the teaching profession. He furthered his cleric preparedness by undertaking his Honors and Masters degrees from London’s King’s College.

Read: Facts about The Mona Lisa Painting, Origin, Who Painted it and Meaning

His early career journey saw him teach English at Madibane and Krugersdorp High Schools. When Desmond was a young boy aged nine in the heat of the apartheid regime, an encounter with Trevor Huddlestone, a white anti-apartheid activist and Anglican priest dumbstruck him and sowed the seeds of Desmond aspiring to be a priest in the future. Trevor Huddlestone tipped his hat in a symbolic expression of respect, something that was uncommon and unheard of from the whites at that time.

His teaching career also saw him lecture at the University of Botswana, Lesotho, and Swaziland.

Desmond Tutu began by volunteering as a  Sunday School teacher at St. Paul’s Church in the Sunday School committee, choir, and more departments. He would then grow to become the first black man to become Bishop of Lesotho, Bishop of Johannesburg, and Archbishop of Cape Town.

He will be remembered as a key figure in fighting the apartheid regime in South Africa. The oppressive regime was against the blacks and promoted white minority rule. In 1957, Desmond Tutu and his wife Mama Leah gave up their teaching professions after the authorities passed the Bantu Education Act of 1953 that would give Blacks an inferior education.

The Archbishop used the church as a platform to promote peace, forgiveness, and push truth among South Africans. He served as the General Secretary of the South African Council of Churches between  1978 and 1985 leading it to become a human rights advocacy organization whose work would be highly impactful.

He was also a published author writing Crying in the Wilderness, The Rainbow People of God: The Making of a Peaceful Revolution, God Has a Dream: A Vision of Hope for Our Time, Hope and Suffering: Sermons and Speeches, and The Book of Forgiving: The Fourfold Path for Healing Ourselves and Our World among more.

Some of The Arch’s most memorable quotes include:

“Do your little bit of good where you are; it’s those little bits of good put together that overwhelm the world.”

“We may be surprised at the people we find in heaven. God has a soft spot for sinners. His standards are quite low.”

“If you are neutral in situations of injustice, you have chosen the side of the oppressor.”

In 1984, he was awarded the Nobel Peace Prize for his unrelenting efforts in fighting against apartheid rule in South Africa. After South Africa held its first fully democratic election in 1994, Desmond Tutu coined the phrase Rainbow Nation to describe post-apartheid South Africa. Additionally, he received the Templeton Prize in 2013, and the honorary British award of The Order of the Companions of Honour in 2015 among so many more.

He married his wife Nomalizo Leah Shenxane fondly known as Mama Leah across South Africa to whom he remained married until his death on 26th December 2021. The couple got married in 1955 and welcomed their first-born son Trevor the following year. In 1957, they welcomed their second child, a daughter named Thandeka. They would later have Naomi and Mpho, their other children.

The Archbishop was diagnosed with prostate cancer in 1997 managing the illness for the rest of his life. After retiring from public life at the age of 79, he continued to speak on societal issues such as LGBTQI+ rights, climate change, illegal arms deals, xenophobia, oppression in Palestine and was a staunch promoter of the ubuntu way of life.

The Arch was full of love, compassion, and was particularly committed to the children in South Africa. He founded the Tygerberg Hospital Children’s Trust, The Tutu Foundation UK, The Desmond & Leah Tutu Legacy Foundation among other initiatives that live on in the service of humanity.

Desmond Tutu will be remembered for his infectious laughter, gentle soul, and deep compassion that fueled his activism.